Best Techniques To Ensure Your Mobile App Testing Checklist. Entrepreneur and Author of Think-Engage-Thrive! Marketing-Phil Masiello laid out some interesting facts regarding mobile apps, out of which in his monetary fact he wrote that: ‘Mobile applications are generated over $77 billion in total revenue by the end of 2017. This is a huge increase in comparison with to the total revenue in 2012, which was $18.56 billion.’

The above fact simply informs that the use of mobile phones have increased in great numbers over just years. This means that the competition over Mobile app development company in Noida are intense.

As there is improvement and advancement in the technology, the things around us are evolving in a fast pace. With such a pace, smartphones have become a basic necessity for everyone. Since, smartphones are the basic necessity, apps are the driving fuel for smartphones. Mobile app development company strive to create good quality apps to increase downloads and profit.

After developing an app make sure that the testing strategy is carried upon every type of device, the app is compatible with. For e.g. if the mobile app is developed for android platform, then make sure you test the app in the devices supporting android apps like tablet, phones, etc. 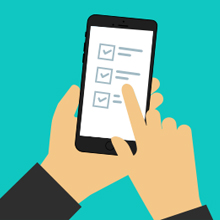 Below are some Best Techniques To Ensure Your Mobile App Testing checklist to guide you and help you with your testing strategy.

Testing is no easy work as it sounds. It is infact strenuous and repetitive and even a minute mistake can ruin your app or degrade it. Mobile app development company in Noida believes that apps should be tested for consistency and stability. Flaws will be visible if testing is done from the customer point of view. Auto tests are helpful in maintaining consistency throughout the repeated tests and verify the result. However, automated tests require initial investment, but it is a worth for every penny. The support of automation test is realized when the tests are executed multiple times with a zero incremental cost.

A rigorous app testing process by the developers is known as alpha testing. Now comes the term beta testing, many of you would’ve come across this ‘beta testing’ word but what exactly it is and what it does. Well!! Since you know the nitty-gritty of downloading an application, thus you must have read in the app store somewhere ‘beta users’ or ‘beta apps’. It is nothing but after the alpha testing is conducted, beta test comes to the scenario, which means that the testing is now given to the real users to discover errors and get real feedback to resolve the issue instantly. Other terms used to describe beta testing are end user testing or UAT (User Acceptance Testing).

This testing technique is the most favourable ones around the globe for better detection of flaws and errors. Cloud test helps in performance, bug and security testing. The best part is that it can be tested from any place and it does not even need any high amount for maintenance. Mobile app development company use cloud testing to eliminate the hanging process of operating system when used extensively and actively.